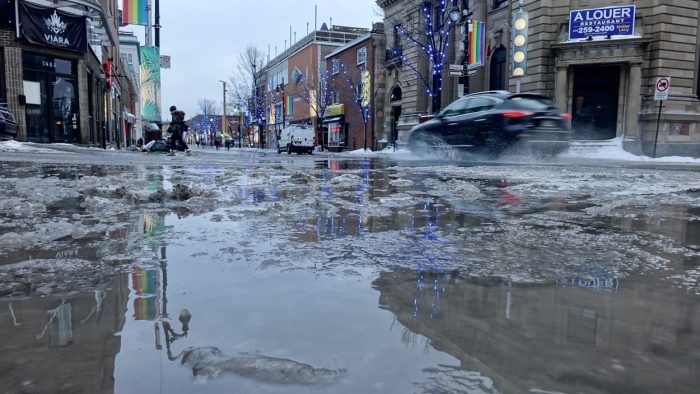 This winter has been a difficult one in Montréal, with several rainstorms followed by a rapid freeze leading to sidewalks that resemble glaciers. Many are wondering if this might be the new normal. Back in November, I wrote a post discussing how the start of “wintry” weather (snow, freezing cold) has been getting later and later over the last 50 years or so, with the winter season getting shorter. Here, I’ll examine a range of climate variables to demonstrate how our winters have already changed with global warming, and how this year’s winter fits into these changes.

The first thing we might assume when we hear “global warming” is that winters will just get warmer. That actually sounds nice, doesn’t it? We first need to keep in mind the difference between weather and climate. When I spoke recently to the Montreal Gazette about how winters are changing, I got an email from a reader questioning whether I was living in the same city as him, since we’ve had plenty of snow this winter, and November was one of the coldest on record in Montréal! So what about global warming?

Remember that weather is what we observe in a given month, week, or day. Climate is the average of all of those months/weeks/days over a certain period (typically at least 30 years). We’re always going to have really cold days and really warm days, but as the climate changes, what constitutes “really warm” and “really cold” is changing. One sign of the warming climate is that we’re seeing far more record hot days than record cold ones. And our “extreme” cold is getting less extreme. For example, through the 1980s, -30°C was observed at Montréal at least once every few years. The last time we hit -30°C (at Trudeau Airport) was in 1994!

Some research also suggests that changes in weather patterns will simply lead to more extremes and variability, meaning we might see both more extreme cold and extreme heat. But again, our perception of what constitutes “extreme” cold is becoming less extreme as the climate warms.

When meteorologists and climatologists examine the winter, we tend to focus on the months of December, January, and February (“D-J-F”). This is the “heart of the winter” – so even though November and March are pretty wintry in Montréal, I’ll be focused on data from three months here, using observations from December 1 to February 28/29.

Our official weather station in Montréal is at Pierre Elliott Trudeau International Airport, about 15 km west of downtown in the suburb of Dorval (station CYUL), which has data back to 1941. When I show data from CYUL, I’ll use blue lines/triangles. For a longer record, there has also been a station located at various locations downtown near the McGill University campus since the 1870s. This station was first located on McGill’s lower campus before being moved in 1994 to the McTavish Reservoir, just uphill. Data from these downtown stations are displayed in red lines/circles. I’ll also plot the linear trend from the beginning of the data period to the present time for each station.

If you’re interested in more details of the data and methodology, scroll down to the section at the very end of the post. I have also added a link to the GitHub repository where you can find the data and code used to make the plots shown here.

So, are winters getting warmer? The short answer is yes, they are. The overall average wintertime temperature at the downtown station has risen from about -9°C in 1900 to -6°C today, and the average at airport in Dorval has risen from -9°C in 1940 to -7°C today. Note that while the airport in suburban Dorval (where the urban heat island effect is less intense) observes colder conditions than the downtown station, the trend is roughly the same at both:

It might be hard to grasp the magnitude of changes in average temperature (what difference does it make if the average is -6°C or -9°C?). Another way to see this is by looking at, for example, the percentage of days where the temperature stays above 0°C for the whole day, which we might consider to represent “thaw” days, where a large amount of snow can melt and we might expect rain instead of snow to fall:

We can see the increase in frequency of above-freezing days is really apparent in recent years. From 1880-1940, it was very rare for temperatures to stay above 0°C for entire days, occurring on only about 4% of D-J-F days. This has doubled to over 8%, and it’s now quite common for 1-2 out of every 10 winter days to stay above freezing.

While this might sound nice, it brings some challenges. One of them is the fact that outdoor ice rinks are a major component of our parks in the winter. An increase in the number of above-freezing days causes increased ice melt and has resulted in a shortened ice rink season, as discussed in a 2012 scientific paper written by several Montréal-based researchers. To keep these rinks open, the city is forced to invest in expensive refrigeration systems.

Similarly, we can also look at the decrease in cold days. Yes, this past November was one of the coldest Novembers on record in Montréal. But if we look at, say, the percentage of winter days with low temperatures less than -15°C, we can see the warming quite clearly:

One of the clearest signals of climate change is increased precipitation in already (relatively) wet areas like Montréal. Warmer temperatures mean more moisture is “available” for precipitation to form. In the winter, a big question is what form that precipitation takes, be it snow, rain, or freezing rain.

First, keep in mind that measuring snowfall accurately is difficult, due to things like wind and compaction of wet snow. However, the trend is pretty clear here (note that here, we’re looking at the full year’s snowfall, not just D-J-F.) Also note that the lack of red dots since 1994 is because we dont have precipitation data at the downtown station since it moved to the McTavish Reservoir. The average annual snowfall from 1880-1920 was 300 cm. From 1980 to 2018, it’s down to 203 cm – more than a 30% decrease!

Similarly, we can get an idea of how the number of snow events are changing by simply looking at the number of days when at least 5 cm of snow fell:

This also paints a striking picture – around 1900, Montréal typically had around 20 days per year with at least 5 cm of snowfall. We now typically see only half as many, around 10 days per year.

Decreasing snowfall will have many important consequences, including major challenges for the ski industry. Additionally, an important point about decreasing snow cover is that snow plays a key role in determining wintertime temperatures. During the day, a snow-covered area will tend to be colder than a snow-free area. This is because snow reflects much of the sun’s radiation back upward, and some of the solar energy also goes into melting the snow instead of warming the air. At night, the snow rapidly releases any of the heat it did store from the sun during the day, so a snow-covered area will also be colder at night than a snow-free one. This creates a positive feedback loop – as temperatures warm, snowfall and snow cover decrease…causing temperatures to warm even further.

So snow is decreasing as winters get warmer. But isn’t precipitation supposed to be increasing with climate change? Let’s not forget that snow isn’t the only type of precipitation we see in the winter. In Montréal, we’ve seen a very rainy winter this year, with about 150 mm from December through February and 6 days with at least 10 mm of rain (including 35 mm on December 21.) So, is this consistent with climate change, or is it just an anomaly? Unfortunately, it looks like these rainy winters may be becoming the norm: we are seeing significantly more wintertime rainfall than we used to…

While the downtown station had a couple of very rainy winters in 1890 and 1900 (largely due to one or two very big rainstorms), the average D-J-F rainfall from 1880 through 1940 was 76 mm. The trend becomes very clear if we zoom in on CYUL where, unlike downtown, we have recent precipitation data:

In winter, big rainstorms are often followed by very cold air. This causes the rain, and all of the snow that melted while it was raining, to rapidly refreeze into solid ice. We’ve seen the problems this causes firsthand this winter. For example, 18 mm of rain fell on January 24, followed by rapid cooling to a low temperature of -12°C the next morning. As a result, all of the rain and snow melt refroze within only a few hours.

As you can imagine, preventing this rapid freezing from happening is extremely difficult, and sidewalks quickly become covered in ice. One major consequence: for the period of December 21-March 20, the number of 911 calls for people falling on ice in the Montréal/Laval region increased nearly 70% this year, from around 750 in the three previous years to 1262. With this increasing rainfall, cities will need to focus more and more on things like water drainage and ice removal instead of just snow removal.

So why is wintertime rainfall increasing? One reason is simply that our winters are now warmer, as we saw above. Almost all wintertime precipitation in Montréal forms as snow several kilometers above the ground. Since temperatures at the surface are more often above 0°C than they used to be, that snow is now more often melting into rain before it reaches the ground. This (unfortunately) means less snow, and more rain.

So, can we blame climate change for our difficult winter this year? This winter’s temperatures were overall near the recent average: the average D-J-F temperature at the downtown station was -7.4°C this year, compared with a 1981-2010 average of -6.6°C. Note that the 1901-1930 average was -8.9°C, so while we are slightly colder than the recent average, the average itself has warmed significantly (climate change!)

However, the most noteworthy aspect of this winter is that we observed the second highest wintertime rainfall total ever recorded at CYUL. Increased wintertime rainfall is consistent with climate change, as shown above, and unfortunately we’ll likely be dealing with more rainy (and therefore icy) winters in the future.

CBC/Radio-Canada recently published a really nice data visualization story about the decreasing snow in Quebec and Canada, focused on observations of snow depth (rather than annual snowfall). For more information about the current and future effects of climate change on Quebec, check out the Synthesis 2015 report by Ouranos.

More details on the data and methods

Data are from Environment and Climate Change Canada at the following stations:

There are several years with numerous missing observations. To avoid skewing our statistics, we exclude all winters (December-January-February periods) with fewer than 10 days with missing temperature data. This gives us 141 “good” winters at the Downtown/McGill sites and 74 at CYUL.

If you’re interested in exploring the data more, I have also uploaded the datasets and a Jupyter Notebook to a GitHub repository.