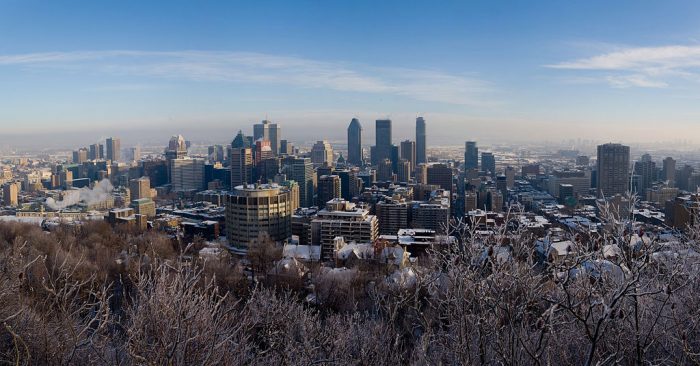 Now, let’s look at when the first observations of snow occurred. There are two ways to look at snowfall. First, we’ll look at the first instance of any observation of snow (even if it’s mixed with rain). If it’s not enough to accumulate on the ground, it’s reported as a “trace” in the daily observation. We’ll also look separately at measurable snowfall, which requires at least 0.2 cm of snow to have accumulated.

Here’s a plot of when the first day with any snow observation occurred:

There’s more spread here than in the first 0°C day chart (note the larger range of the y-axis), and it’s harder to discern a very clear trend. However, it is notable that since 2002, snow has never been observed before October 17, something that was quite common prior to 2002. The average first snowfall date over the whole record is October 22. The latest was November 23, back in 2011, with the earliest snow falling on September 20, in both 1962 and 1977.

The first measurable snowfall tends to occur about one to two weeks later than the first snowflakes, with a long-term average date of November 4. Though the trend here is nearly flat, the running mean has gotten a few days later in recent years, to around November 12.

We’re just about to enter the typical period where freezing temperatures and snow start to occur here in Montréal. The first 0°C day now tends to occur around October 25, give or take one week (which is around 2 weeks later than before 1990). In recent years, the first snowflakes fall on average during the first week of November, with most years between October 15 and November 15. The first measurable snowfall tends to happen a week or two later.

It’s important to note that the period of winter weather in Montréal is getting noticeably shorter with climate change. While this might sound like a good thing if you’re not a fan of the cold, there are negative effects locally that you might not have considered. For example, Montréal has a huge number of outdoor ice rinks in its parks during the winter, and climate change has resulted in significantly shorter seasons for these rinks all across Canada. The City of Montréal is spending millions of dollars to refrigerate rinks in an attempt to extend the season. Last year, the city permanently closed the rink on Beaver Lake on Mont-Royal because of now dangerously thin ice:

“With global warming, we had a terrible year last year in terms of ice melting,” said Luc Ferrandez, who oversees parks and greenspace on the city’s executive committee.

And these local negative effects are still small compared to what other parts of the world are experiencing. Have a look at the Synthesis 2015 report from Ouranos (English/French) for more information on climate change in Québec.